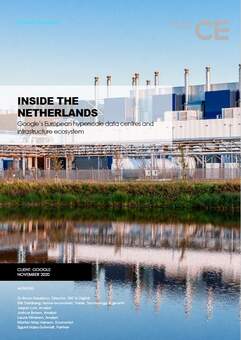 Google has invested heavily and widely in data centres and related infrastructures in Europe. Currently, it operates hyperscale data centres across Europe: Fredericia in Denmark, St. Ghislain-Mons in Belgium, Hamina-Kotka in Finland, Dublin in Ireland, and Eemshaven-Groningen and Agriport in the Netherlands.

The Netherlands: A digital nexus in Western Europe
The Netherlands is well progressed along the digital transformation path, with the fourth largest share of IT spending globally dedicated to Public Cloud services. Although it is already a frontrunner among digital economies, the Dutch government recognises the need to remain so through the Dutch Digitisation Strategy 2.0. The already extensive digital and physical infrastructure in the Netherlands makes cities like Amsterdam and regions such as Groningen increasingly important hubs. However, given the nature of the digital transformation, this means that these Dutch cities and regions will become hubs not only in the Netherlands, but also for the rest of Europe, as neighbouring countries also digitalise.

Growth and jobs. The Netherlands is a gateway to Europe for global network infrastructure, as shown by the case study of Google. The company is now facilitating even greater EU-wide connectivity via the Netherlands. It has done so as part of a wider infrastructure programme which

In addition to the digital transformation supported by Google’s investments, Google’s Eemshaven-Groningen and Agriport hyperscale data centres are on the forefront of the green transition in digital energy.

Energy efficiency. Every time we as users choose to rely on services provided online, we channel indirect demand for energy. As traditional non-digital activities continue to shift to new digital applications, the way energy is being consumed is changing. The data centre industry has significantly raised its energy efficiency. In fact, recent global research established that while demand for data driven services has increased exponentially (by 550 percent) over the past 10 years, data centre energy usage has remained relatively stable (increasing by only 6 percent). At the same time, there is potential to improve efficiency even further. We estimate that, if across Europe all business email servers were hosted by data centres as efficient as Google’s, this would save the equivalent of the annual household consumption of electricity in Ireland.

Renewable energy. Driving the green revolution forward, Google is also the largest corporate buyer of renewable energy sources. It does so by committing to and signing Power Purchase Agreements (PPAs), key enablers for the renewable energy project developer/investor. As of September 2020, Google had signed 24 PPAs for energy production from European wind and solar farms to match the energy consumption of its data centres. In addition, in September 2020 Google stated that it will be carbon-free by 2030.

The study is commissioned by Google.

For further information and media enquiries regarding the findings of this report, please contact Dr Bruno Basalisco, available at bb@copenhageneconomics.com

See report
We use cookies on our website to give you the most relevant experience by remembering your preferences and repeat visits. By clicking “Accept”, you consent to the use of ALL the cookies.
Cookie settingsACCEPT
Manage consent